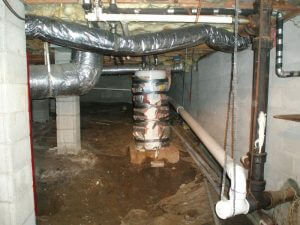 Standing water under the house can be cause for concern. It is common for a home to be built with some space between the poured basement and the footer. However, when excess water collects under the house, it can cause musty basement smells and even seep up through small cracks in the slab.

When surface water is not diverted from the house and its foundation, it can run back towards the structure and collect under the house. Downspouts not connected to a drain pipe and not angled to move the water away from the house can cause water to run towards the house instead. Patios that are not angled away from the foundation also can cause water to collect under the house. Low spots in flower beds that are alongside the foundation also can contribute to standing water under a home.

Standing water under your home can create several issues if it is a reoccurring problem or if the area of the standing water is large. First, the water should be discharged. A sump pump typically can handle the water removal.

The Effects of Standing Water

When standing water under the house occurs regularly, structural problems can arise including a loss of foundation stability. If left unchecked, the standing water also will cause musty basement odors and even can lead to mold problems. Mold can be a very serious health issue, particularly for people with allergies or asthma. Mold negatively affects indoor air quality. Under the house water and moisture can attract bugs, which may then enter the house through a cracked foundation. Some bugs such as the cockroach can carry a form of Salmonella that make humans ill. Prevent these risks by contacting a foundation repair specialist.

This information was created and researched by Aaron Goucher, the General Manager of Olshan Foundation Repair in Kansas City, MO.  Aaron is a veteran of the industry with multiple associations and memberships.