What is Hydrostatic Pressure?

In regards to basement foundation problems, hydrostatic pressure can be best described as the constant force of water pressure being excreted on the basement walls.

As a general rule, hydrostatic pressure increases as subsurface depth decreases, due to the increasing weight of earth and gravity generating downward force from above. This is what makes basement foundations that reside beneath the earth in moist soil conditions so susceptible to foundation damage. In other words, the deeper the foundation and the wetter the soil conditions, the greater the risk for structural damage.

An Easy to Understand Concept of Hydrostatic Pressure

The concept of hyrdrostatic pressure can be demonstrated by what happens deep in the ocean. The lower you go, the more pressurized the conditions become (14.5 psi increase in pressure for every 33 feet) eventually resulting in force so powerful it can cause structures to collapse.

Is Your Basement Affected by Hydrostatic Pressure? What Can You Do About It?

If your home’s foundation or basement walls are built fully or partially below the water table, or on a hillside where water runs down from above, be on the lookout for the rampaging force of nature known as hydrostatic pressure, which can cause cracks in walls, flood your basement and ultimately cause significant water-related damage.

Hydrostatic pressure describes the outward and downward pressure caused by standing water pushing against any object or surface that blocks it, in this case — your basement walls. The pull of gravity against standing water is relentless, causing the water to push and push hard against anything that restricts its flow. Water is a dense substance, weighing in at about 60 lbs. per cubic foot of volume, and it is capable of generating immense hydrostatic pressure when a prodigious quantity of it is prevented from following its intended downhill course. 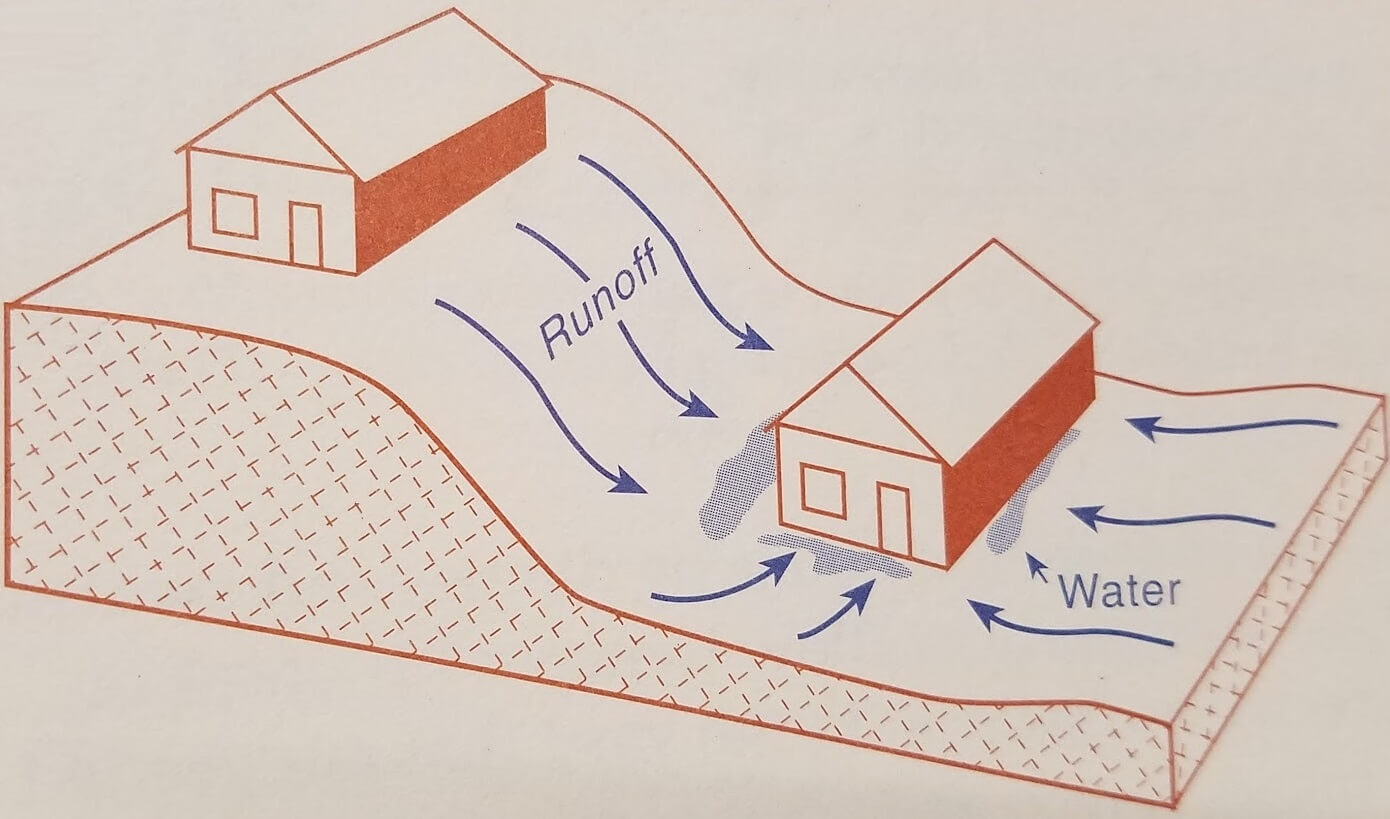 This basement home sits below a hill, and is susceptible to runoff, resulting in high levels of hydrostatic pressure. Which can ultimately cause walls to crack.

Hydrostatic Pressure and its Impact on Your Foundation

Unless you’re living in a home constructed on a floodplain you probably don’t have to worry about hydrostatic pressure above ground.

But below ground is a different story. Concrete foundation slabs, their connected flooring systems and the basement walls that surround them are highly vulnerable to the intrusive effects of hydrostatic pressure.

When the underground sections of a home block the natural movement of groundwater, during times of heavy runoff the soil will become saturated and foundation slabs and basement walls will suddenly become stressed by thousands of pounds of unforgiving hydrostatic pressure.

If your home is well-constructed it may not crumble under the pressure, at least not for a while. But there’s something about your home’s basement walls that you might not realize: they aren’t nearly as solid and impenetrable as they appear. This is especially true of concrete used in home construction more than a decade ago, when concrete was often of a lower quality than it is today.

Regardless of quality, however, when concrete dries unevenly, small microscopic air tubes can form on the inside, and those tubes may pass all the way through the concrete from one side to the other.

Water sitting behind basement walls and foundation slabs may not bust them down or uproot them, but it will find and fill each invisible opening in the surface of the concrete it touches. This can create a series of tiny flowing veins or rivers that will ultimately seep (continuously) on the other side.

If this is happening in your home, the flooding of your basement may proceed at a snail’s pace. But it will proceed, and the longer the soil stays saturated around your home the worse your basement flooding problem will become.

Other visible signs of basement moisture problems due to hydrostatic pressure often include:

Other Causes of Basement Flooding

Hydrostatic pressure is the most common cause of basement water penetration. But it isn’t the only possible culprit and you shouldn’t cast it in the villain’s role as soon as you notice elevated moisture levels in your home’s lowest areas.

Other potential sources of basement moisture problems include:

No matter what you suspect, you should investigate the situation thoroughly, either on your own or with the assistance of a structural expert, before jumping to any conclusions about the precipitating factors behind your basement flooding woes.

Inside your basement the signs of unwanted water penetration will be obvious. Puddles on the floor, moisture running down the walls, musty odors, mold or mildew outbreaks, insect infestations… the indicators will be unmistakable and you’ll likely be rushing in to clean up the mess.

But how can you tell if the problem is actually caused by hydrostatic pressure? Here are some possible clues: 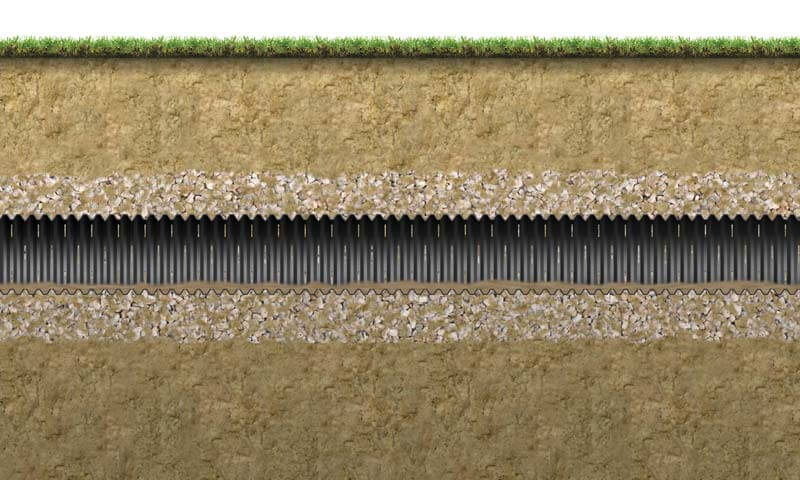 If basement flooding from hydrostatic pressure goes on for too long it can cause long-term damage to your home. Once your DIY efforts have been exhausted may need some help with repairs, and you may want to consider contracting a structural repair expert to devise and implement a more permanent solution to your moisture penetration problems.

Fortunately, you are not helpless to resist the rising hydrostatic tide. It is possible to construct your own french drain, a time-tested method for alleviating all types of water intrusion and hydrostatic pressure issues.

French drains are long, sloping trenches that contain a continuous expanse of perforated pipe, which is surrounded all around its underground perimeter with a protective layer of gravel, crushed rock or small stones. By replacing heavy, compacted soil with gravel and draining water away from the basement walls, pressure is reduced.

The trench should be dug on the uphill side of the area where underground hydrostatic pressure is most acute, parallel to the affected section of underground basement wall (the trench can be dug to curve around the house if underground hydrostatic pressure is a problem on more than one side). The pipe should empty somewhere downhill from your home, for example in a dry well, into a storm drain in the street or into an adjacent wooded lot.

If the source of your water problem is runoff from a nearby hill your french drainage trench can be fairly shallow, possibly starting off at a depth of two feet and sloping gradually downward from there. But if being below the water line is the source of your basement flooding you may have to dig down and install your drainage pipe deeper, in order to capture and divert enough incoming water to solve your dilemma.

While shallow trenches can be dug by hand with shovels, if a deeper drain is required you may need to rent a mechanical trench digger from an earth moving equipment company or a home improvement supply store like Home Depot.

These days it is not at all difficult to find detailed design plans for these ingenious water diversion systems on the Internet, or you can ask for help from a friend or neighbor who’s already built one.

Hydrostatic Pressure and Your Home’s Foundation

While leakage and flooding is the most obvious sign of hydrostatic pressure, if the problem is left unaddressed for too long it could cause consequential structural damage to your home’s foundation.

You may be able to perform minor repairs or clean up the mess caused by basement water infiltration, but if you see signs of cracking, heaving or bulging in basement walls or concrete slabs it is time to contact the professionals.

Hydrostatic pressure is a surprisingly common problem in American homes, and as soon as you notice unwanted moisture in your basement don’t hesitate: identify the source of the problem and take whatever action is necessary to address it immediately.