We are dedicated to the health & safety of the communities we operate in. We diligently adhere to CDC & local health safety guidelines.
Your health & home are our #1 priority.

Foundation Repair From The Interior

When entire foundations are sinking and sagging, installing underpinnings such as support piers or pilings under the ground around the perimeter of the foundation is often the preferred method of repair. This will lift the foundation back to a satisfactory elevation and help stabilize it.

However, there are instances where installing additional underpinnings underneath the interior of the structure is recommended.

In these instances, installing additional underpinnings underneath the structure’s interior is often recommended. Or, in some cases, supporting the interior portion of the concrete slab can be achieved using alternative methods such as mudjacking or polyurethane injection. 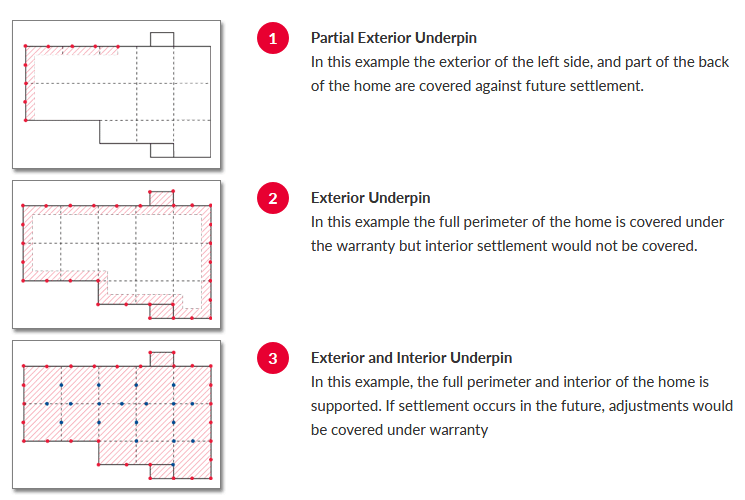 How Foundations Sink and Cause Damage in the Interior

Heavy structures compress the earth underneath, possibly enough to make the entire foundation sink. These foundation problems are especially common wherever soil types are prone to expansion and contraction, based on cycles of moisture saturation and drying. Clay soil in particular fluctuates in volume quite frequently, and this is bad news for slab foundations that rely on consistent soil density to retain their original position.

At some point this becomes a problem that must be corrected, presumably with pilings, piers or a specially prepared combination of both.

Inevitably, when a sinking foundation is lifted on the edges there may be a gap left in the soil below, and any part of the foundation that isn’t supported by piers and/or pilings (which is anywhere on the interior) may continue to sag and bow.

If you have water erosion troubles, caused by groundwater saturation, poor drainage or below-slab plumbing leaks, the interior of your foundation may sag even if the foundation as a whole has not been sinking. Clay soil naturally contracts during periods of extended drought, and that is another reason why under-slab soil might lose its supportive capacity.

Naturally, when foundations sink or sag from the interior, it will have a significant impact on the structures they support, unless something is done to solve the problem.

When a home or business owner’s foundation requires additional support from the interior, the best option usually calls for the installation of underpinnings along the affected area. There are two primary ways to achieve this.

Tunneling Underneath The Foundation

Tunneling is usually the most desirable method of repair. In this repair, the crew will tunnel underneath the structure and install underpinnings along the interior beams of the structure from outside of the home or building. This is great for homeowners that do not want to replace expensive flooring or deal with a mess inside of their home’s. For business owners, the tunneling option enables them to continue business operations without disruption.

The downside of tunneling? It’s usually the priciest and slowest repair option available.

Concrete Breakout From The Home’s Interior

Underpinnings can also be installed along interior beams from the inside of the home. This method requires concrete breakout, meaning some flooring will have to be replaced. This repair is loud and can leave behind dust.

There are two other evidence-based remedies that work: mudjacking and polyurethane injection. The latter is now more popular than the former (in fact mudjacking is something of a dying art form), but each is a workable solution that can restore structural integrity to the interior and help prevent further damage caused by sagging concrete foundations.

Mudjacking: Doing it the Old-Fashioned Way

Mudjacking is an older, less technically sophisticated method of interior foundation/floor reinforcement. Nevertheless, mudjacking can be a reliable approach and there are still some foundation companies that rely on it as their go-to method for lifting the interior of the foundation.

The “mud” injected beneath sagging foundations in homes or other buildings is comprised of a slurry of sand, soil, water and cement. During installation, two-inch holes are usually drilled in the basement or first-level floor directly over the part of the foundation that is sinking, and the mud is then injected in sufficient quantities to lift the foundation (and the floor it supports) back into place.

While mudjacking is effective, as you can imagine by the nature of the substance injected it is a fairly messy procedure, and may involve some extensive cleanup after the injection process is completed. The two-inch holes in the floor must be filled in as well, but despite the somewhat difficult cleanup and repair requirements mudjacking procedures can usually be completed in just one day.

Another approach is to inject a semi-liquid/semi-solid substance under the slab from inside the home, or from outside along the foundation perimeter, until the gaps beneath have been completely filled and soil density and volume have returned to a normal level. Pumping in additional material gradually but steadily lifts the sagging sections of floor and slab slowly back into place.

While mudjacking generally gets the job done, polyurethane injection gets it done more quickly, efficiently and cleanly.

Olshan’s patented PolyLift™ Concrete Lifting System offers a good example of the wonders of polyurethane injection technology. The PolyLift™ system uses a two-part, ecologically-safe, polyurethane solution that can be injected directly into the soil beneath a sagging foundation through small holes (smaller than those required for mudjacking) drilled in the basement or ground-level floor.

In contrast to mudjacking, there is less mess created by the use of the clean polyurethane PolyLift™ solution, and the small injection holes only require a quick patching, making cleanup and repair a snap. The polyurethane will dry and harden quickly, meaning no disruption of daily affairs for home or business owners who want to get things back to normal quickly.

Because the installation process is so unobtrusive and the substance it uses so strong and reliable, polyurethane injection is appropriate for a wide variety of jobs. Homes, driveways, sidewalks, commercial buildings, apartment buildings, pool floors, municipal streets… wherever concrete is sagging polyurethane injection can be used to help restore it to the proper elevation. 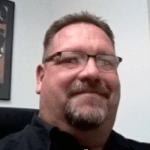