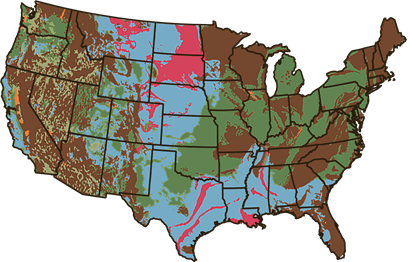 Good soil is a crucial component for the stability of any structure. Its type and long-term health must be considered before breaking ground on a building’s foundation. In certain regions of the country, the soil can be affected by a naturally occurring phenomenon called soil expansion.

What is Soil Expansion?

Essentially, soil expansion is when the ground soil expands due to excessive moisture and contracts when the moisture is removed – usually through extreme heat and dryness.

Foundation damage from expansive soil can appear in several forms, such as cracking in exterior or interior walls, uneven floors, and misaligned windows and doors. Over a short period of time, this can cause severe damage to structures if not treated properly. In fact, soil expansion costs U.S. building owners and land developers billions of dollars every year.

What Regions are affected by Expansive Soil?

While expansive soil can be found in regions all over the world, it particularly affects a few specific areas in the United States. Some of the most heavily affected areas include California, Colorado, Texas, and Virginia. This is largely due to the fact that these regions experience severe moist climates and extreme dry climates within just a few months.

These regions are also made up of highly expansive and reactive clay soils, and the foundation damage can actually be noticed within the first several months after the structure has been completed. In Texas, for example, when extreme moisture causes the soil to expand dramatically, it can cause the foundation to move, which can then lead to cracking and bowing in the walls as the bearing capacity in the foundation changes.

If you think you need help combating foundation issues related to expansive soils, get in touch with structural repair professional.